I sprayed powder down there 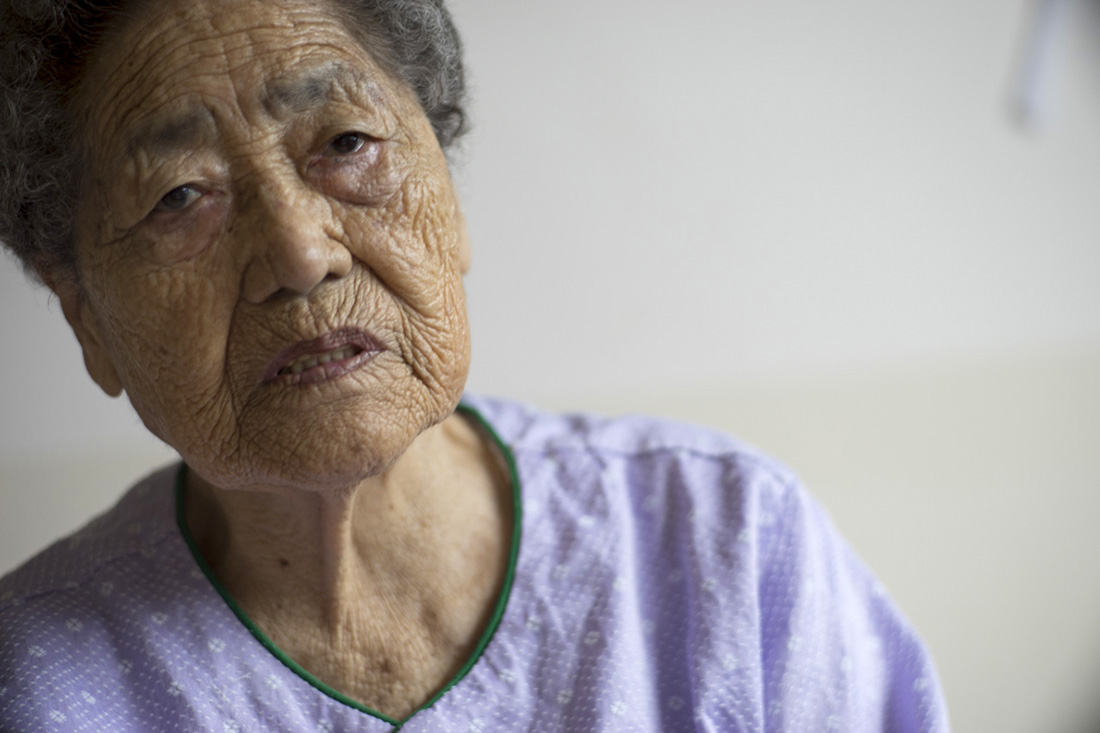 We were poor but I grew up in my parent’s love. I worked at a factory that made nets when I was young. On my day off, I was waiting for a boat to go to my aunt's house in an island.

A man approached and forcibly took me to Busan, saying that he will help me make money. I couldn’t even tell my family. I was boarded a ship

and the place I arrived was Dalian大连, China. There were ten small, shabby rooms lined up. I was put into one of them. I was scared.

Suddenly, the door opened and a soldier in a yellow military uniform came in. He swooped on me. Soldiers lined up in front of my room every day.

At least 10 came a day. I sprayed powder down there to prevent sexually transmitted disease, and got a shot #606 in the forearm. It was painful.

3 years later I was sent to the Philippines. Not only were there Korean women, but also 1-2 Japanese women, too. 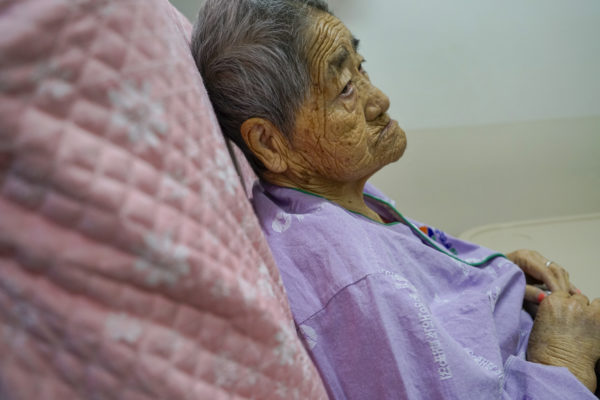 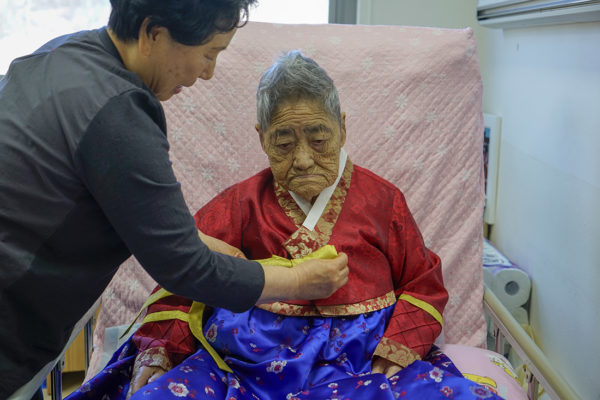 When the war was over, I came back to Nagasaki on a Japanese warship. From there, I came home through Busan. My mother had passed away,

and my life in my hometown was difficult because rumors went around that I was a “comfort women” and people gave me sharp looks. I became a concubine, but the first wife understood my situation.

* In 2000, I met 4 Grandmas in Tongyoung통영, but now, Bogdeug Kim is the only one left. Not long ago, she had her 100th birthday party at the nursing home. Even then, she prepared to go out, doing her own makeup.

I thought I would be paid money and clothes

for doing chores in Manchuria.

I received 480 won as an advance payment

for a 3-year contract,

which I gave to my step mother. 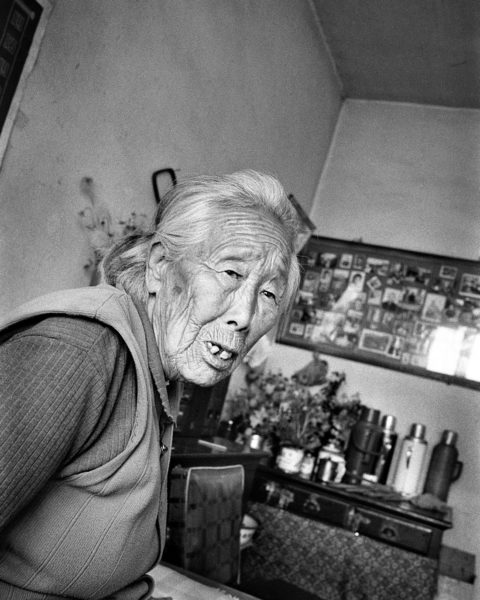 It was a Japanese informant who took me away. He was wearing a uniform and a sword. I thought I would be paid money and clothes for doing chores in Manchuria. I received 480 won as an advance payment for a 3-year contract, which I gave to my step mother.

When I arrived in Manchuria, it was not a factory but a brothel type of place. The owner was a Japanese couple, and they called me Hidomiひどみ.

8-10 soldiers came a day. When soldiers bought the ticket, the owner gave them condoms.

A military doctor examined for sexually transmitted disease and found that I had a serious venereal disease.

I was sent to a hospital in Dongning东宁 and treated there for 10 days. When I was discharged from the hospital, I came back to find a “Do not enter” sign on my door. 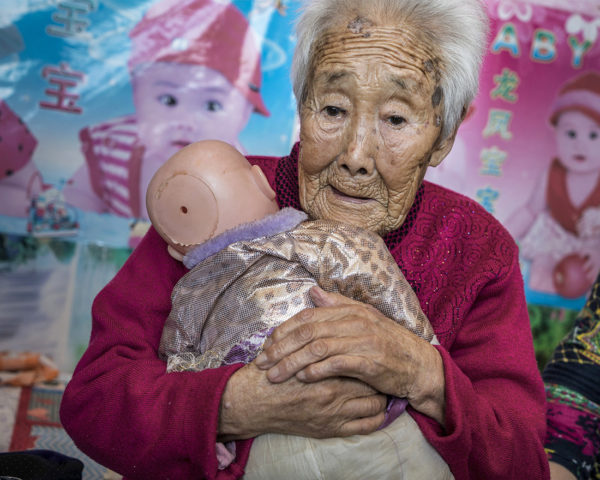 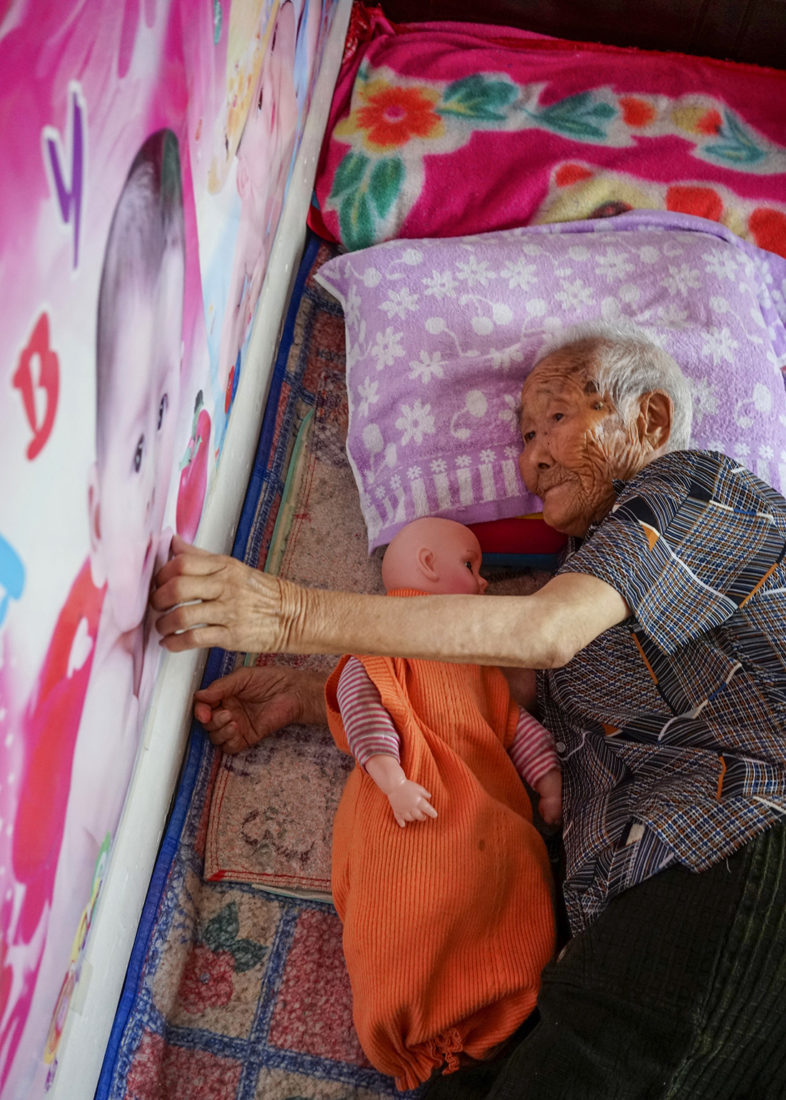 All the cost for the medical treatment and the money I couldn’t make during the time became my debt.

After the war ended and liberation came, I decided not to go back because I didn’t think I’d feel comfortable in my hometown. I married a Chinese man near here.

He was so violent that all the neighbors told me to get a divorce. I couldn’t bear to live with him anymore, so I left and came to this nursing home alone.

* Since she couldn’t bear her own child, she became obsessed with baby. As she became schizophrenic, she put a picture of a baby in her room. The director of the nursing home gave her a baby doll. She treated it like her own baby that she talked to it and slept with it in her arms.

There were too many soldiers and women

but not enough rooms that they divided

the rooms in the middle with sheets

so the women could serve the soldiers

in each side of the room at the same time.

Officers came during the normal days, 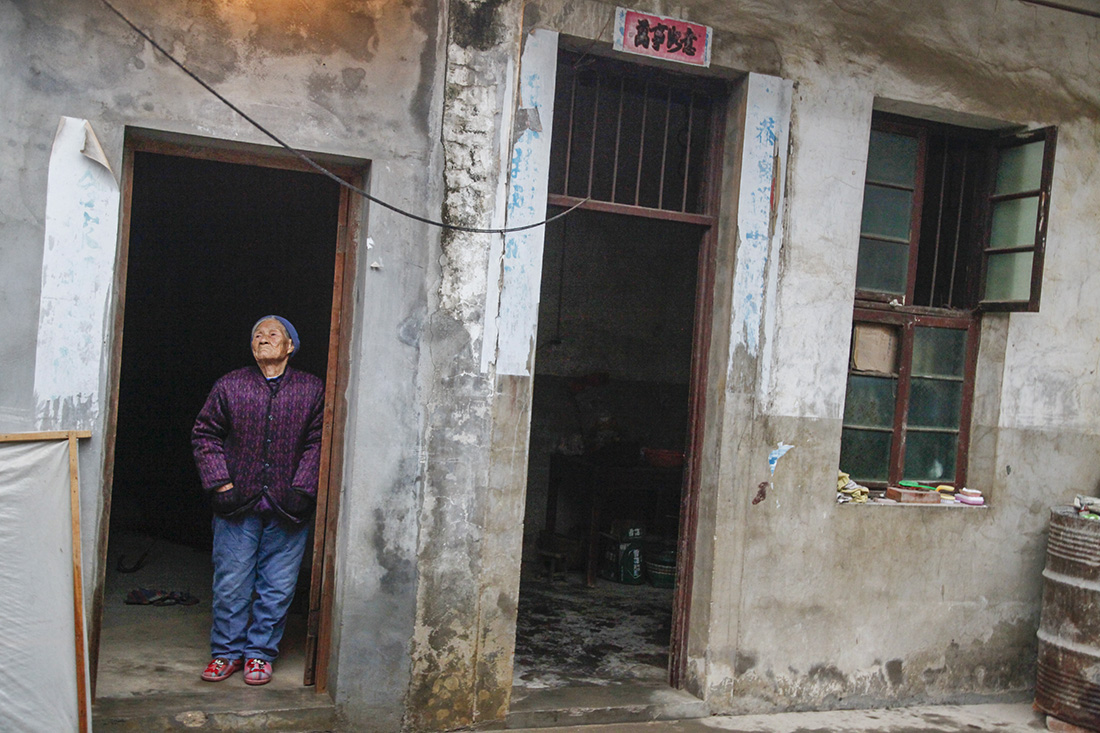 My family was so poor that I grew up in my grandparents’ home near Jeonju(전주). I was working at a distillery at low wages but was sold to a brothel in Kyoungsung due to a debt with the owner. Then, I was sold again to a Chinese “comfort station.” I went through Nanjing南京, and arrived at Wuchang武汉 in Wuhan.

There were too many soldiers and women but not enough rooms that they divided the rooms in the middle with sheets so the women could serve the soldiers in each side of the room at the same time. Officers came during the normal days, but on Sundays, I had to serve about 20 soldiers. The Japanese managers distributed all the necessary items.

The rule was very strict that we were only allowed to go outside in a group.

After the war, they gathered women near the Japanese concession site.

I was scared and ran away with the help from a local. I wanted to go back home, but I did not know how to get back. I didn’t have parents there anyways, so I decided to stay there because I was ashamed of what I went through.

I got marrieåd in Xiaogan孝感, but I couldn’t bear a child. I adopted a little girl and raised her. In 1970, I had a surgery to remove my uterus, probably due to what I went through in the past. 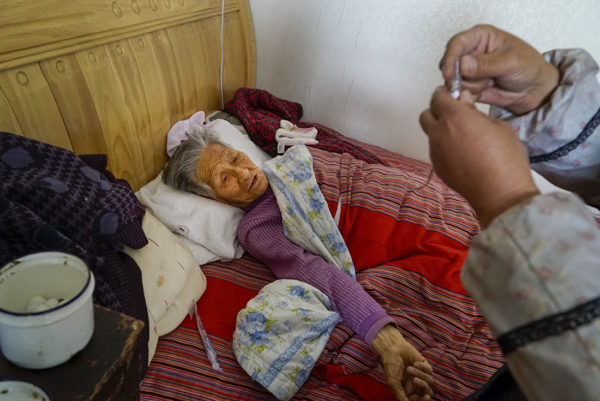 * She had a step daughter, but she didn’t care about her. Twenty three volunteers and sixty five donors from Korea, Japan and China worked together to build a room for her who was living in a warehouse without a ceiling. I was glad to see her being happy and grateful that her winter will be warmer now.

and gave me a contraceptive shot.

When I tried to pee after the first three soldiers,

I had an extremely sharp pain.

One day, a neighbor girl who was older than I came over wearing nice makeup.  She told me she made money at a Japanese factory, and this time she was going to Shanghai上海. She asked me to go with her. I said I would. A few days later, two men came.

We boarded a train to Kyongsung(now Seoul), and took another train with 40 other women to Dandong丹东 and Nanjing南京, and then went to Wuhan武汉 by boat.

When we arrived in Jiqing-ri积庆里, Hankou汉口, I was at a loss since it was very different from what I was told. 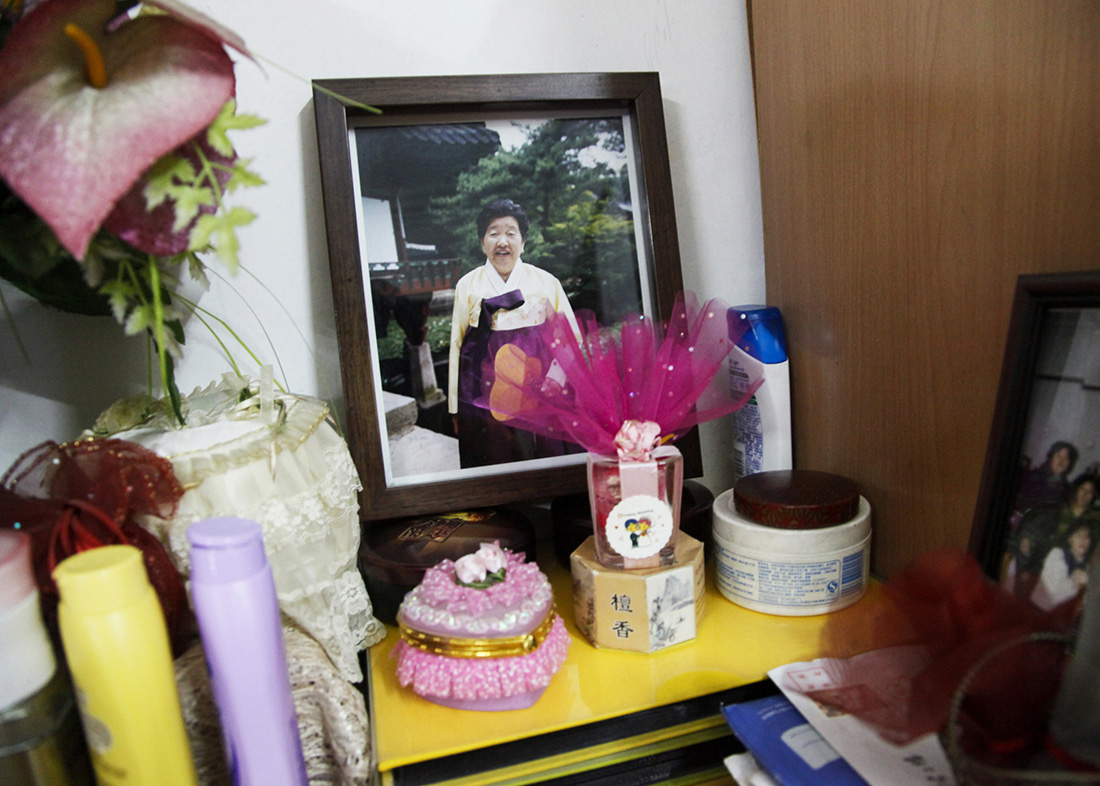 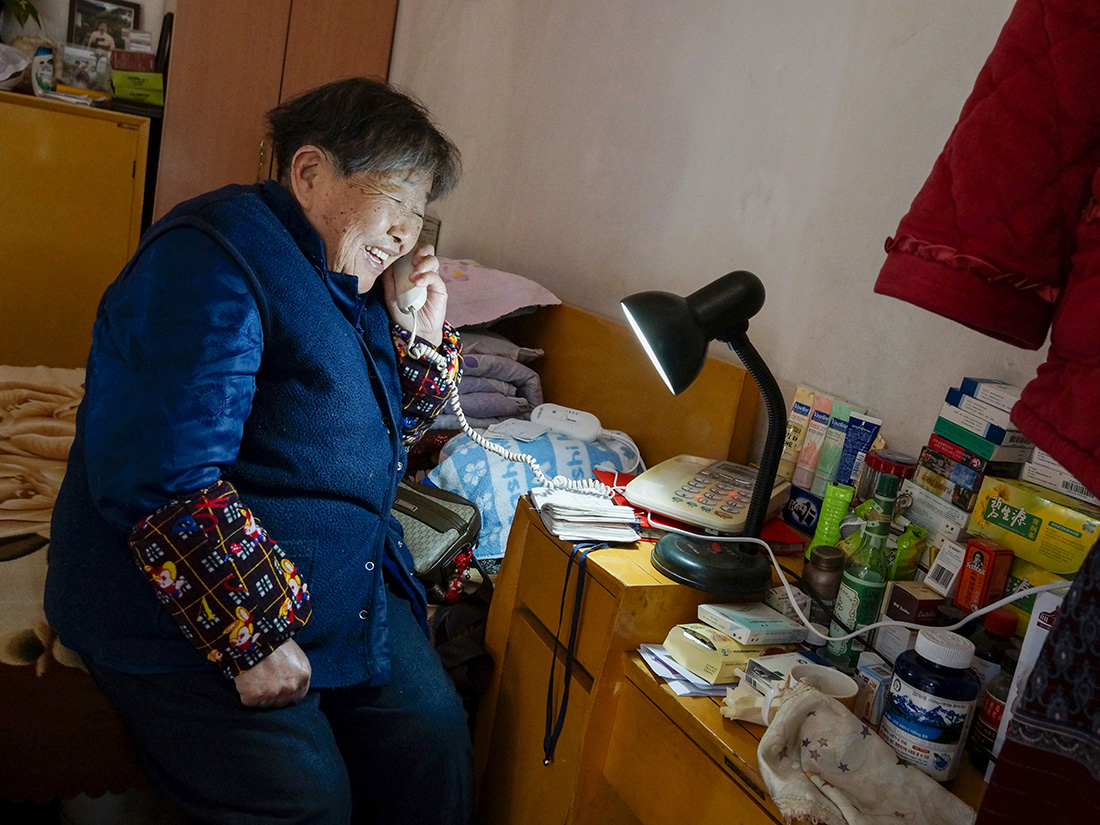 First, a military doctor examined my body and gave me a contraceptive shot.  When I tried to pee after the first three soldiers, I had an extremely sharp pain.

My room was on the second floor, and the soldiers picked a girl based on the pictures of us hanging downstairs. On Sundays, the soldiers lined up outside.  The rule said one hour per person, so the owner scolded me if it went over an hour. 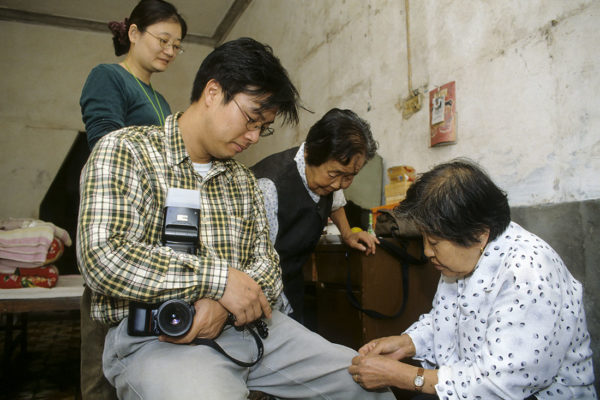 The rule said one hour per person, so the owner scolded me if it went over an hour.  After the war, Koreans gathered in Jiching-ri. Many women returned to Korea,

but I didn’t go, thinking what would I do with this body?  I could not bear a child, so I married a Chinese man with three children.

* In 2001, I went to Wuhan to meet her for the first time. I still remember how she stitched my pants, standing, because my pants caught the corner of a desk and got torn. She said a man shouldn’t dress like that. In 2015, she tripped and fell from the second floor staircase that she has been transferred to Korea and now is receiving treatment.