because they knew I had been raped.

I married a man from another village. 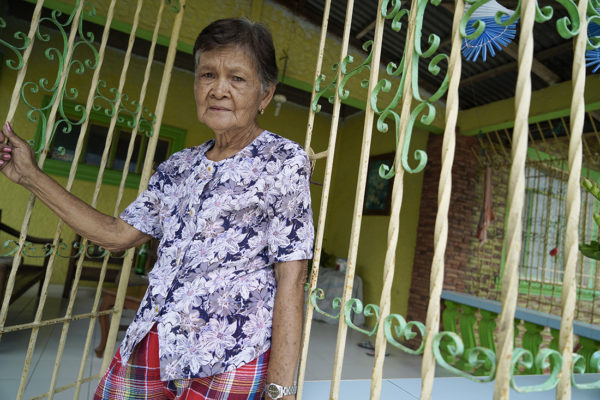 My father passed away early, and I was working as usual to help my mother sell banana leaves at the market. In the afternoon, Japanese soldiers came and forced me into a truck. There were three women and many Japanese soldiers.

I was taken to Arayat Central School, which was being used as a military base. Each of the women was confined to a different room. I couldn't see them, but I could hear them crying.

In the evening, 2 Japanese soldiers came in and started beating and undressing me. I cried and resisted to stop. It was painful.

The soldiers didn’t come the next day. Later, the soldier who raped me came every night, but did not abuse me. During the month or two while I was kept in the base, I constantly protested to send me back home. He may have felt sympathetic that he told me to go home. 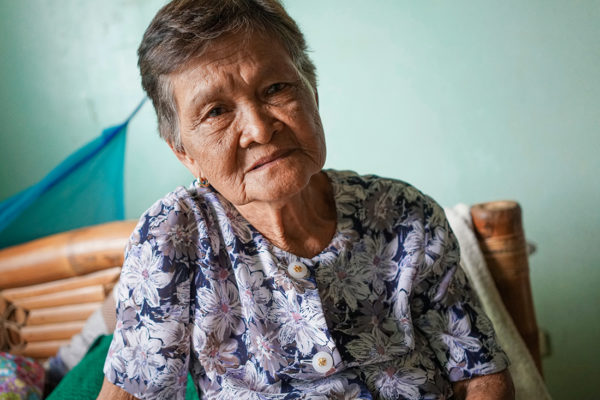 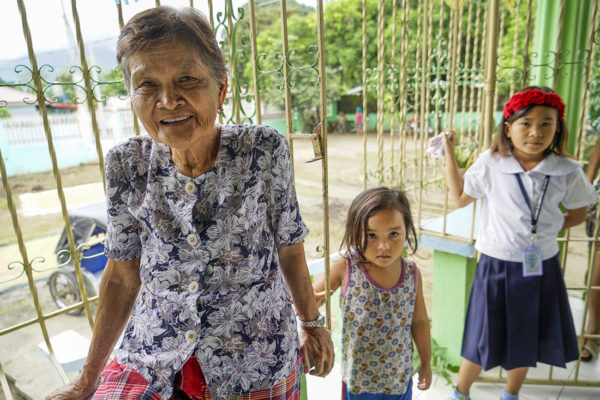 When I returned home, the house had been burnt down and my mother was sick in bed with a fever at my neighbor's home. I was in shock for a few months. The villagers did not like me because they knew I had been raped. I married a man from another village.

I want the Japanese soldiers would repent for the cruel acts they did to me. I want justice to be recovered before I die. And I want an official compensation.

* During our conversation, an old man was watching us from behind. I asked later who he was, and I was surprised to hear that he was her husband. I was impressed how her family shared and relieved her pain.

Sometimes I get nightmares

when I hear Japanese on TV.

The Japanese government should be held accountable

for what happened during the war. 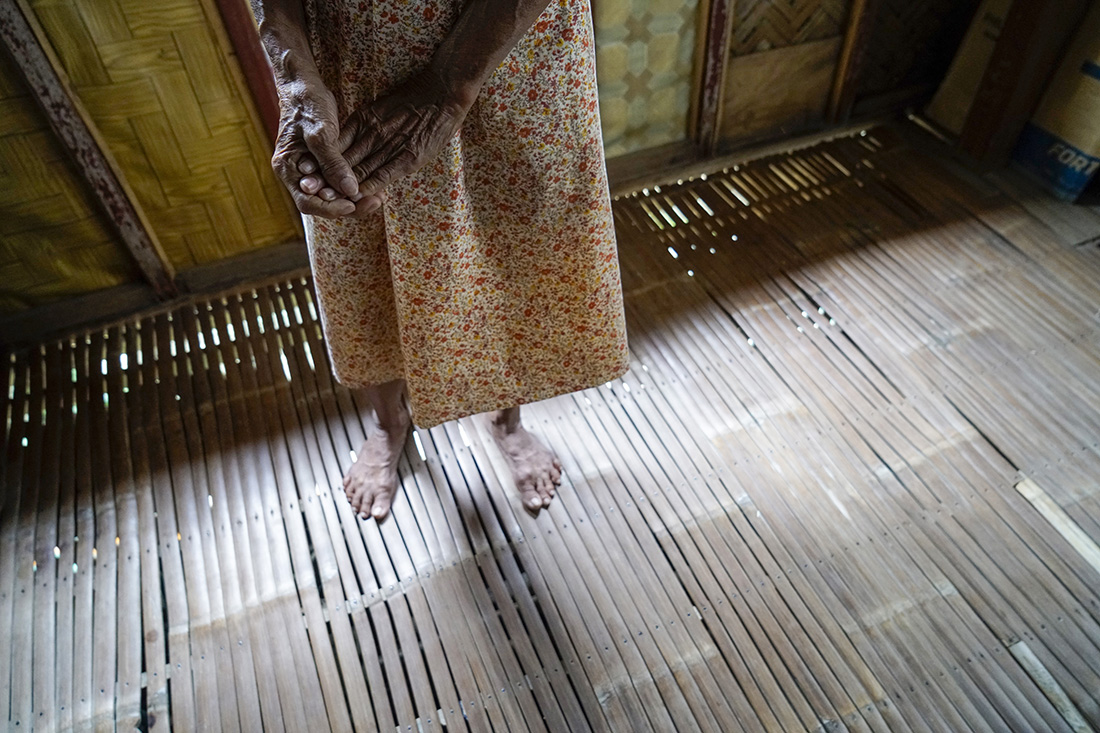 I was hanging the laundered clothes on a clothesline when three Japanese soldiers came and grabbed both of my arms. I was scared because I could not understand what they were yelling in Japanese.

I was forcibly dragged to Arayat Central School. I was locked in a room alone. After a while, my sister Maria was also dragged there. Two soldiers came in the room,

and I tried run away from them in the room, but I was caught and beaten. When the first soldier raped me, I bled heavily and felt so painful. When the next soldier did it, I lost consciousness.

When I woke up, my clothes were wet with blood. My sister named Valeriana was also captured and in the same room, and she seemed to have gone through the same pain. Soldiers came back the next day.

My body was still swollen but they didn’t care. I cleaned during the day, and I was raped three or four times a week at night. 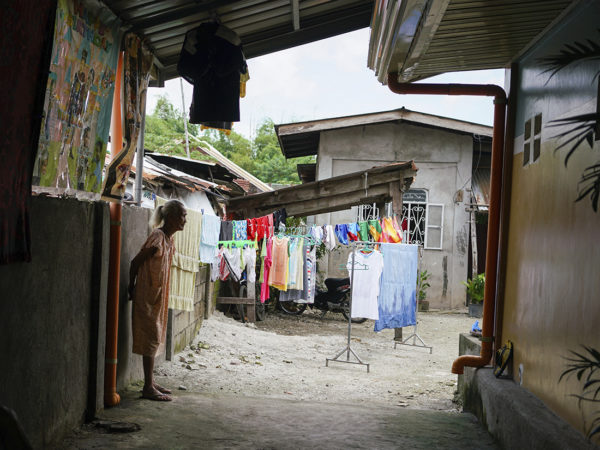 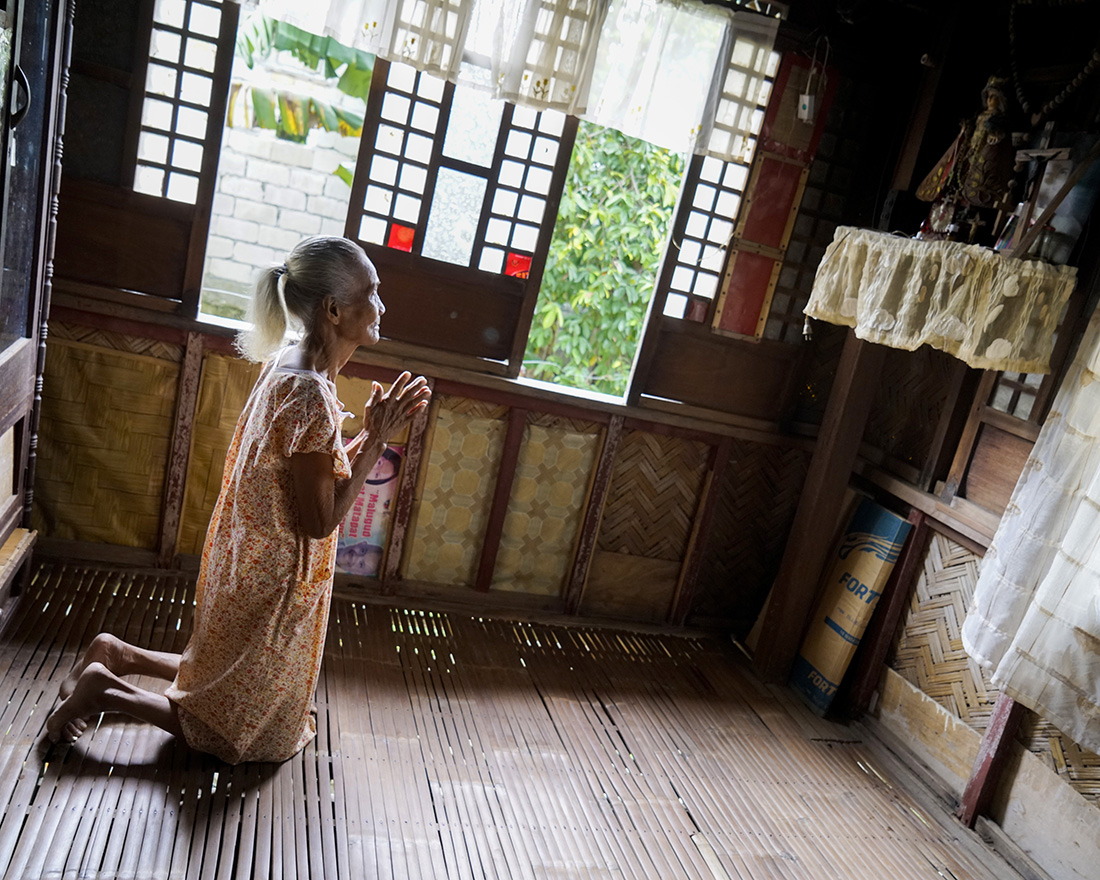 I told what happened to my husband when we got married. He accepted everything about me.

Sometimes I get nightmares when I hear Japanese on TV. The emotional and physical damages caused by sexual assault cannot be calculated in money. The Japanese government should be held accountable for what happened during the war.

* On one side of her room, halfway up the dark stairwell, there is a crucifix and a statue of Jesus for praying. It was beautiful and sad at the same time to watch her pray in the light pouring through the large window.

Even after that, two, three Japanese soldiers

would come to rape me

frequently and took food from me.

My father was hiding out elsewhere and I was home alone.

There was no hope. 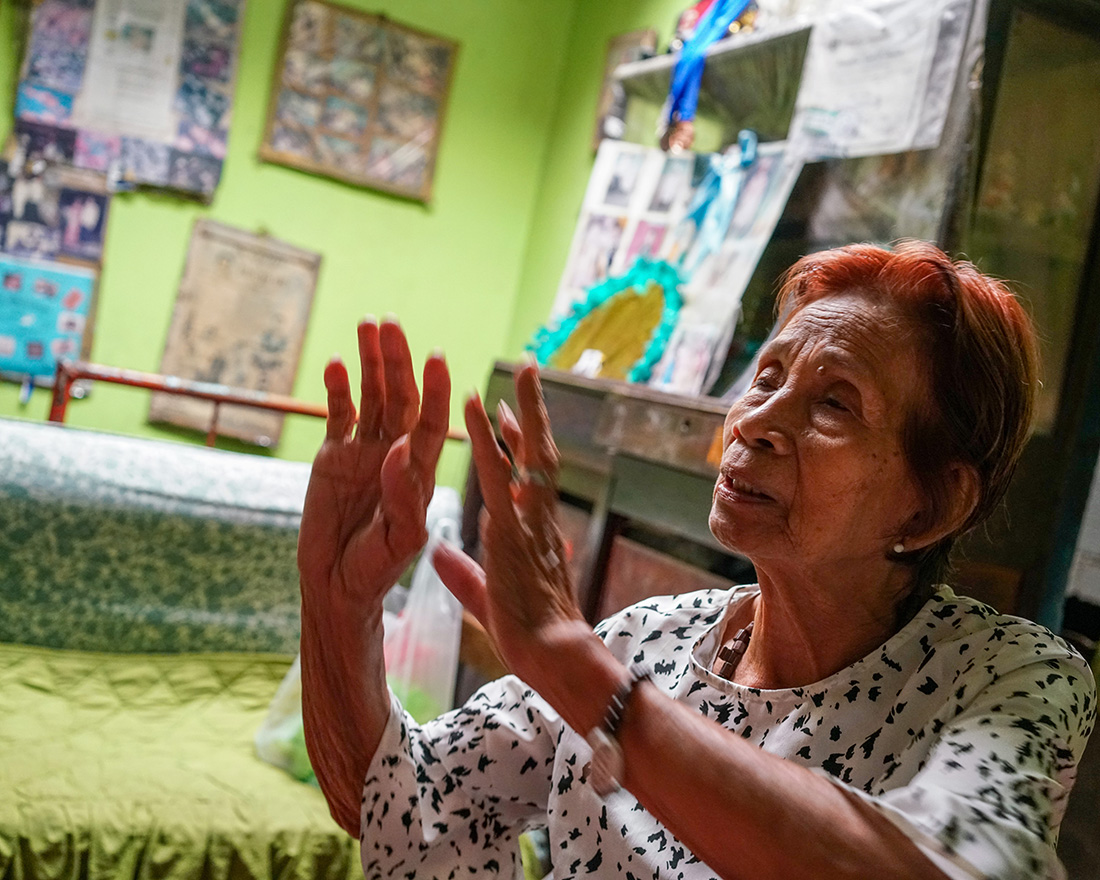 When I went to the village market with my grandmother, two Japanese soldiers hit me that I collapsed and they tied my hands behind. When I resisted, they cut my ear with a knife and then took me away. I was taken to room in a government office where a Japanese soldier came

and tried to hold me. I started screaming but the soldier covered my mouth and raped me. I was raped by more soldiers after that. There were about ten other women.

I worked during the day, and soldiers kept coming at night. After about 10 days, soldiers told me to go home. They thought we were guerrilla spies, so they let me go on purpose to put a tail on me. When we arrived home the next day,

the Japanese soldier shot my grandmother and killed her for no reason. In this chaos, the two Japanese soldiers raped me. I fainted and I gathered myself after a while and came home. 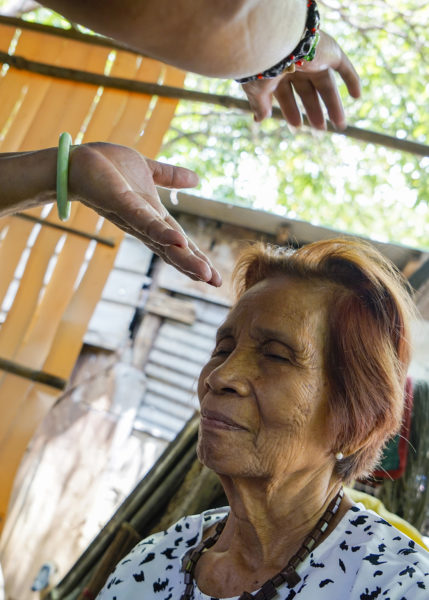 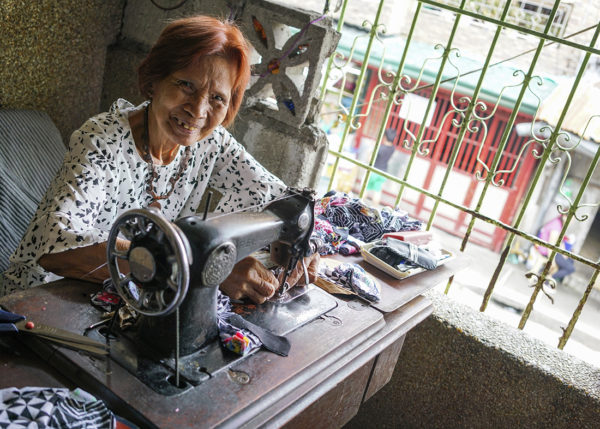 the Japanese soldier shot my grandmother and killed her for no reason. In this chaos, the two Japanese soldiers raped me. I fainted and I gathered myself after a while and came home.

Only after one month of this, the Japanese soldiers finally stopped coming. I have suffered from traumatic amnesia. I couldn’t even speak at the time.

* In order to make ends meet, she seeks for pieces of cloth and make cleaning towels for sale. She uses a sewing machine to make it in a size small enough to hold in one hand. It’s only 1 peso (3cents) each, but she says it’s better than just resting, and she keeps looking for work to do.