but I didn’t get any medical treatment.

I was finally told to go home after three months later

because I had venereal disease. 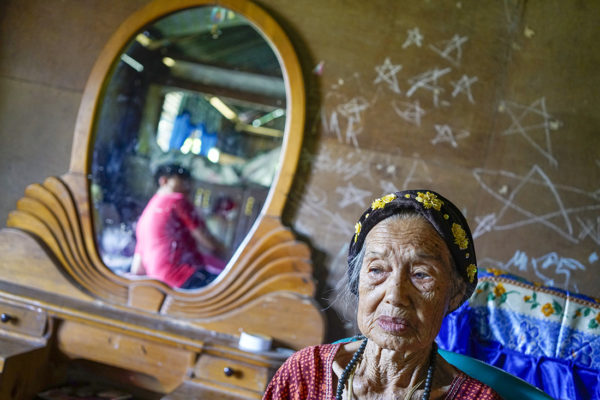 My parents were out to do farming, and I was home alone. Japanese soldiers came and yelled at me to come down from the second floor. I got scared and came down. I was taken to the military base. They were constructing Japanese buildings: men made bunkers, and women leveled the ground even every day.

I was working when a Japanese soldier with a long sword came to me. He touched my hand and brought me to a barak (a house made of bamboo, sometimes it means “comfort station”) and raped me.

I worked in the morning but I was repeatedly caught by two to four soldiers who did it to me in the afternoon. There were several rooms, and there were about ten other women.

가I sometimes slept there, but I usually came back to my sleeping quarter in the evening. Because of the constant rape, my vagina swelled up and it was so painful, but I didn’t get any medical treatment. I was finally told to go home after three months later because I had venereal disease. 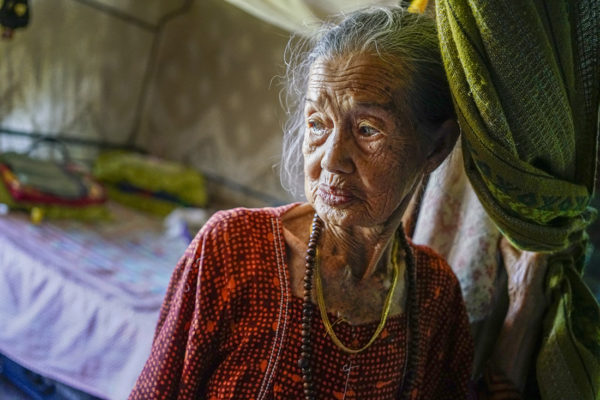 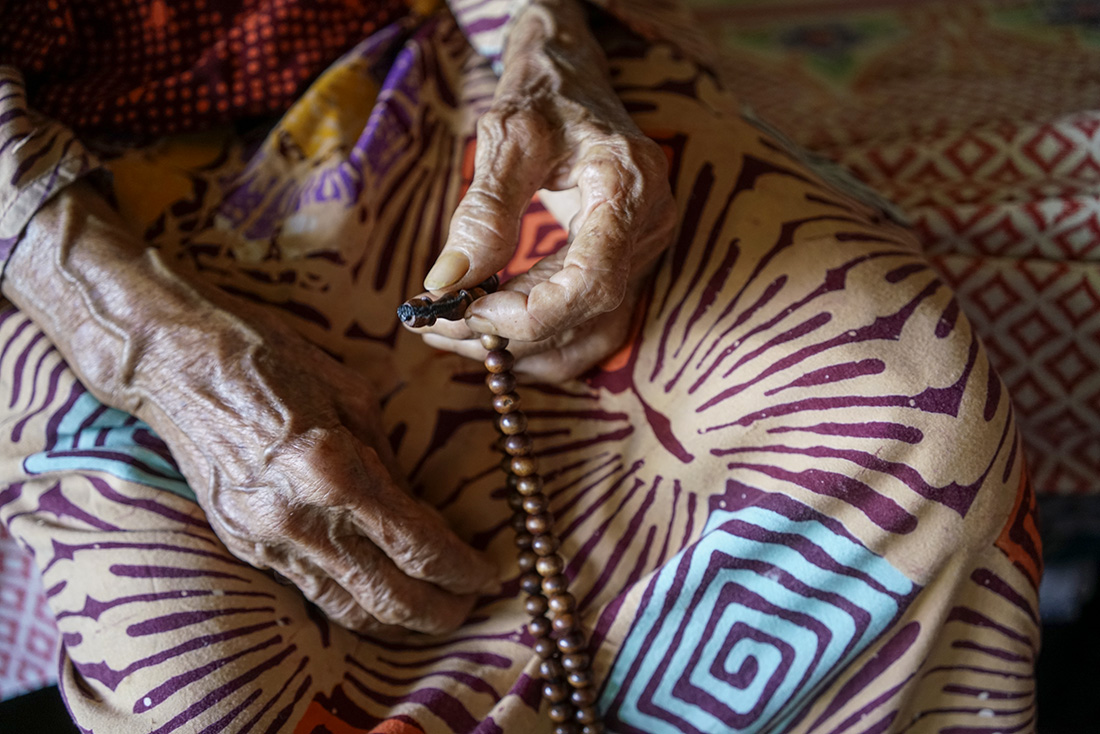 I walked home without getting anything from them. My father got medicine from a doctor from his hometown for me. I only heard that the disease will affect men.

During my life, many men were interested in me, but I was personally scared. I was very scared because of Japanese soldiers.

* This Grandma continuously fiddles with Tasbih (Islamic rosary) during the interview. She spends many hours praying every day. There’s nothing else she can do. This is the only way to soothe her mind.

I got pregnant twice there,

but miscarried both times. 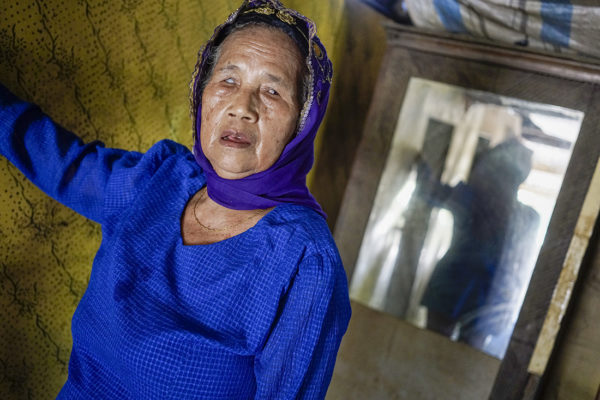 I was on my way to work at a coffee farm with two friends of mine. Suddenly, Japanese soldiers forced us into a vehicle, saying that we had to go somewhere to do farming. There were already several women in the vehicle. They took us to a remote place, washed us, changed our clothes, and sent each of us into one of the rooms.

Then, five soldiers came into the room one at a time, and raped me. About 4-5 of them came every day. I got pregnant twice there, but miscarried both times. Japanese doctors, 1 male and 1 female, gave me medical treatment and medicine, but it didn’t help at all but made me feel more pain.

One day, after being raped by five soldiers, and my vagina swelled up and it was extremely painful. Then, another soldier was about to do it, I felt so much pain, so I screamed. He got so angry and started punching me until my eyes bled. 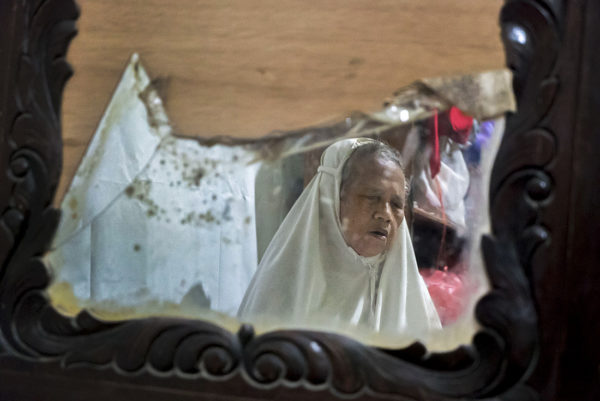 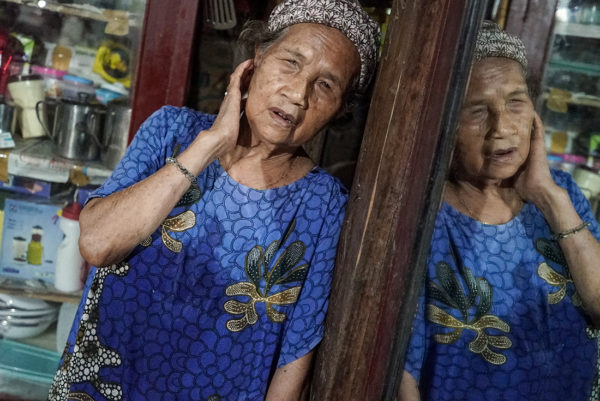 Only then, the soldier told me to go home. I walked along the mountain path for 8 days and returned home. Since then, I can’t see well with my left eye, and I completely lost vision in my right eye. I still see a doctor for my eyes these days.

Besides, I have difficulty breathing, and whenever I think about those days, I get a headache. I truly want the Japanese government to apologize for those horrible things Japanese soldiers did to me.

* This Grandma is a relative of Darmawi who supports the victims in Sulawesi. She lived alone until 2015, but as her eye vision degenerated, she now lives with Darmawi’s sister.

They were mainly Indonesians,

but there were women from other places, too.

There were about 40 people,

one in each room. 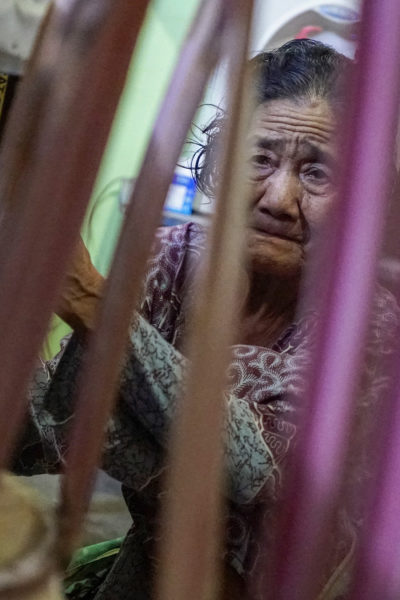 I went out to the market to buy some things. Suddenly, Japanese soldiers came and dragged me to Malimpong. Many women were dragged

to a huge barak (a house made of bamboo, sometimes it means “comfort station”). They were mainly Indonesians, but there were women from other places, too. There were about 40 people, one in each room. 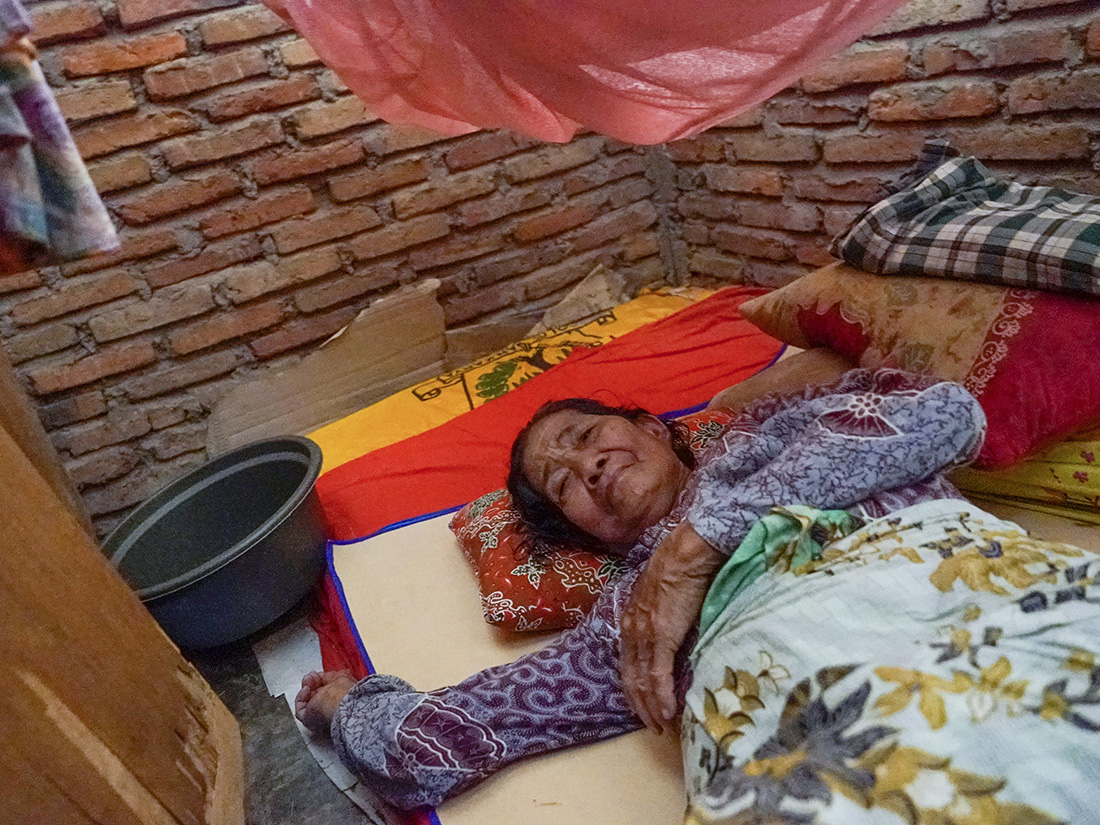 I had to serve at least five soldiers a day. There was no condom, no treatment. Japanese soldiers managed the place, and some soldiers wore long swords. I was released three months later, when the Japanese soldiers left. It was about 30 kilometers from there to my home, and I walked home. My parents asked where I had been.

I told them I was taken by Japanese soldiers and I was afraid. My mother said it’s not my fault because I was forcibly taken away. 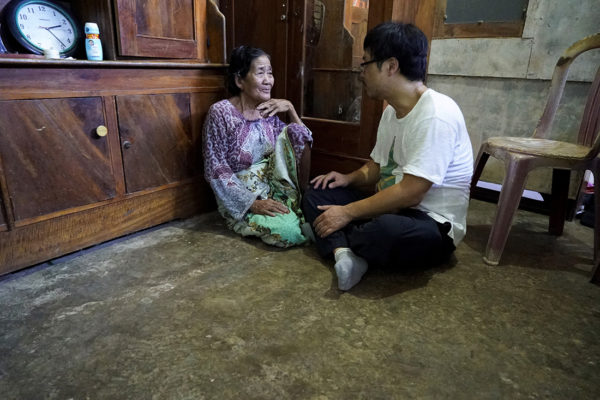 I married a man from the same hometown, and my husband knew what happened. My entire body is painful because of what the Japanese soldiers did to me.

I wish they give me help for everything. I need a lot of help as I’m sick and wounded.

* She cannot walk because she was injured in an auto accident in front of her house in 2015. She crawls on the floor in the house. Even after the surgery, she didn’t recover completely. She has to use a hose to urinate. She goes around her children’s homes to stay, and but the current house she lives in has no room for her that she put a mat behind the kitchen cabinet and made a ceiling with cloth.

because I could’ve been killed if my father found out.

According to the culture of Gowa,

a woman must die if she experiences such thing.

My father did not know this until he passed away. 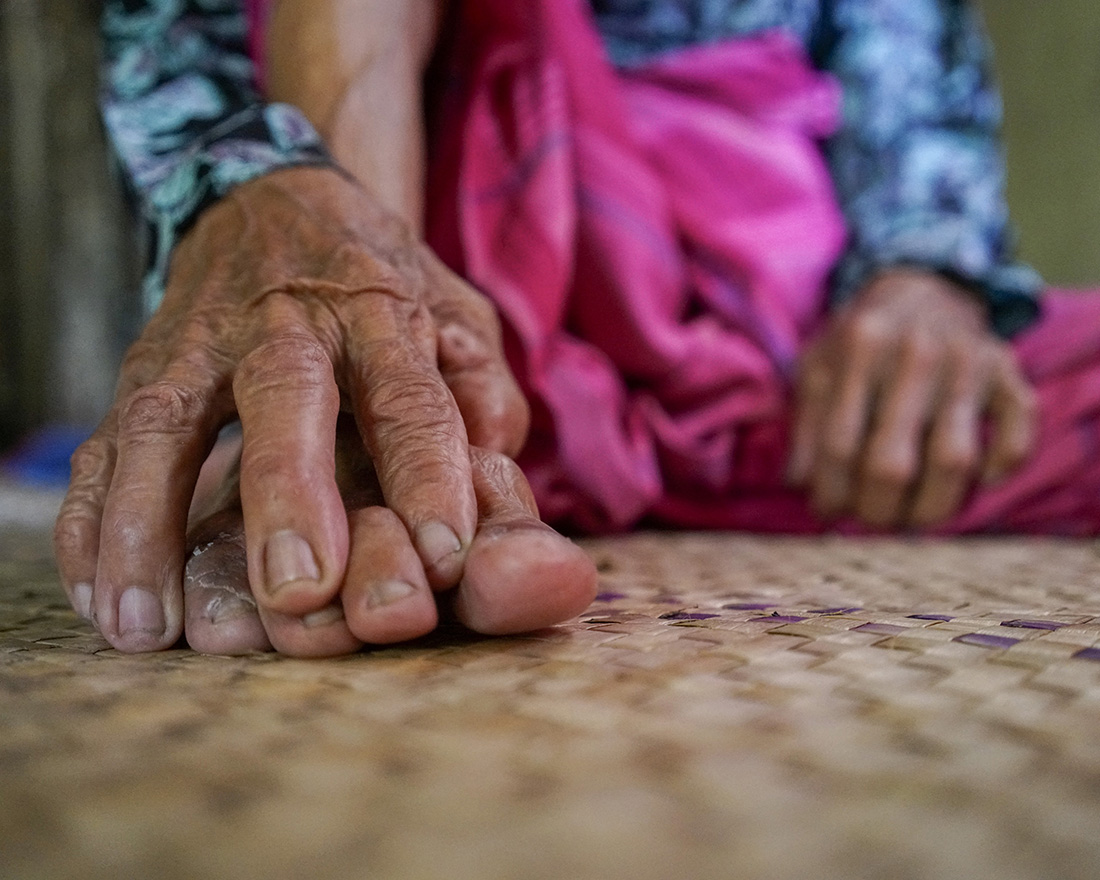 Around the time I was junior in the middle school, Japanese soldiers came to Ujung Pandang. First, they took my father, and ten days later, they took me away by four soldiers unbeknownst to my father.

There were about ten other women. I was usually raped by 3 soldiers a day. Sometimes two additional soldiers came.

I did not know what to do when they did that to me. I cried and told them I wanted to go home, but I couldn’t go and they continued to do it while I was crying. If I resisted, they tied my hands to a tree.

I started bleeding down there, but there was no treatment or medicine. Japanese soldiers gave me strange medicine after sex. I thought it was contraceptive.

There were women who died there. I felt listless when I heard a girl was sent back home after becoming sick, but she died a week later. 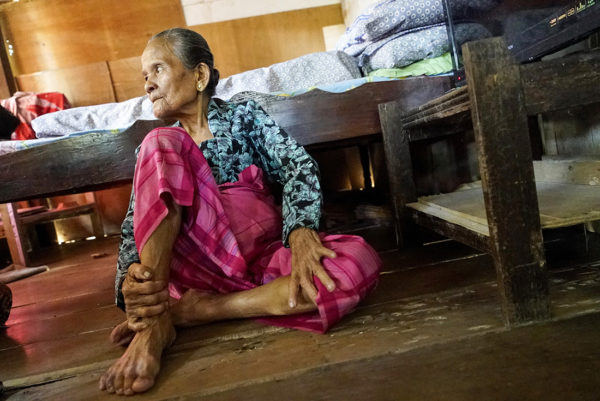 5 months later, Japanese soldiers left. I didn’t tell my father what happened to me

because I could’ve been killed if my father found out. According to the culture of Gowa, a woman must die if she experiences such thing. My father did not know this until he passed away.

I can’t even breathe well, and my whole body hurts when I get up. If the pain is too great, I go to see a doctor to get treatment and medicine. Then, I feel better. I want to keep on taking medicine.

* The house is so old it’s falling to one side. She has several children, and she lives with her fifth daughter, Salla.

I had to say hello every time I met him.

If I did not say hello, he got angry

but didn’t hit me. 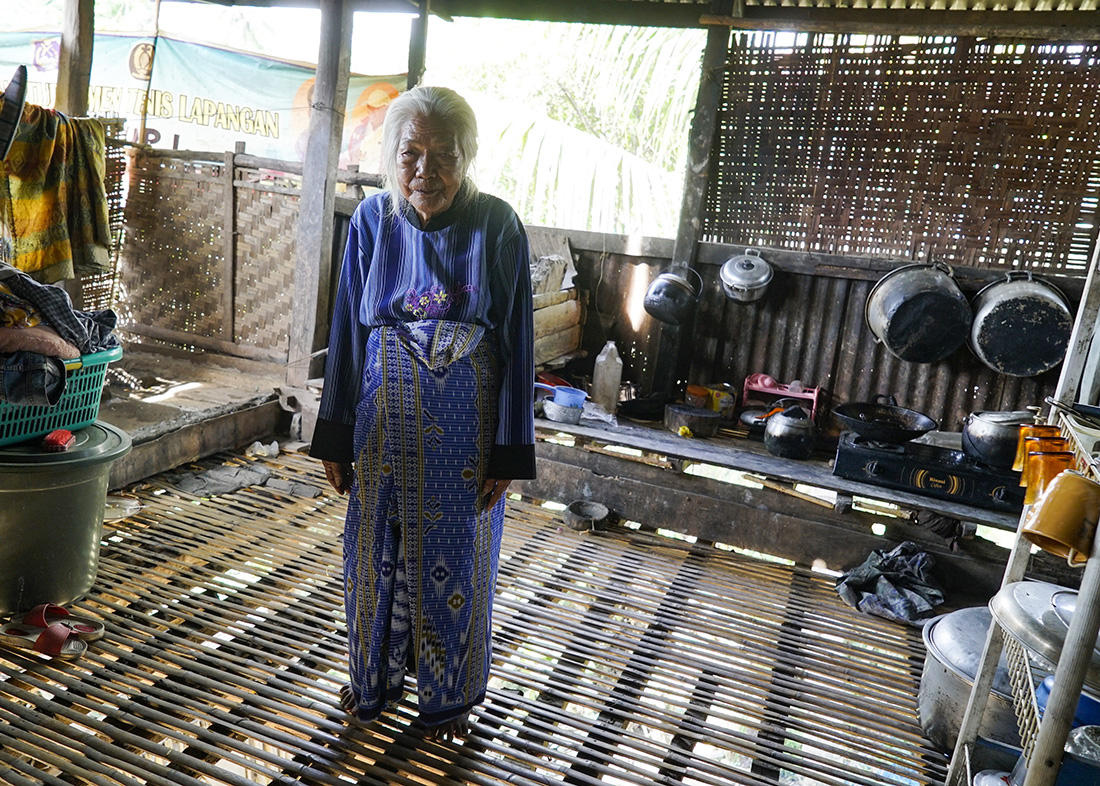 My parents were farmers, and I was happy with ten siblings.

The village foreman came and forcibly picked out twelve girls and sent to the Japanese military, saying that he was ordered to do so. I wasn’t even properly dressed when I was forcibly sent away.

The village foreman said that we were going to make cotton yarns. I was 20 years old, and there were some women older than me.

We made cotton yarns during the day, but we were taken away by the soldiers in the evening. Almost every night, the same soldier came and slept with me. I had to say hello every time I met him.

“ごんにちわ, さよなら(Hallo, Good bye)” If I did not say hello, he got angry but didn’t hit me. 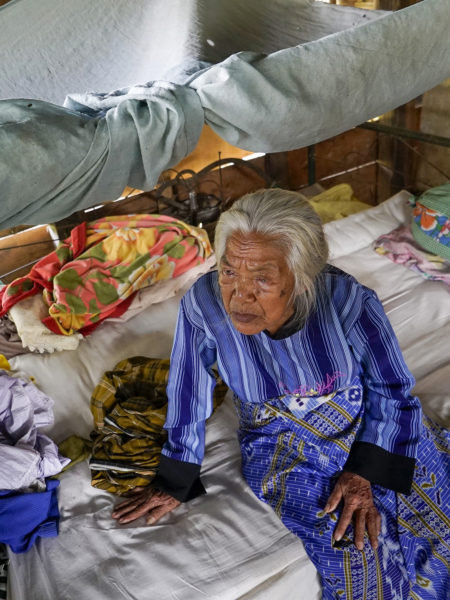 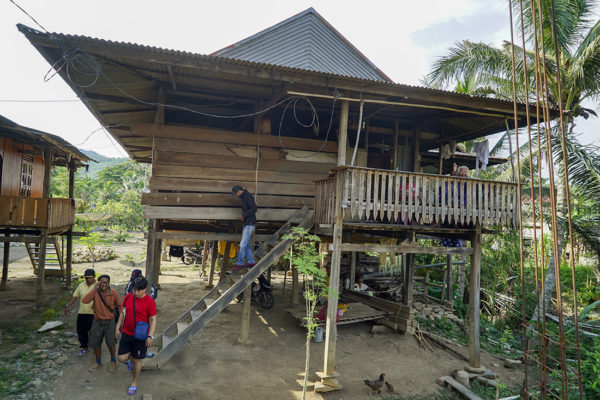 Every night, I did it with that Japanese soldier and then went home. I had my period at the time but didn’t get pregnant.

Some of the other women got pregnant. I don’t know where and how they live now.

* Her bed is in one corner of the kitchen because there isn’t a proper room to live in. The 2nd floor is woven with bamboo that it looks dangerous as she may get a cut. She kept pointing at me with her finger while I interviewed her. I only heard later that she said I look exactly like that Japanese soldier but the interpreter couldn’t tell me this in front of her.

I didn’t have any specific disease

but my vagina was itchy and occasionally bled.

I did not get any medical treatment

because there was no doctor. 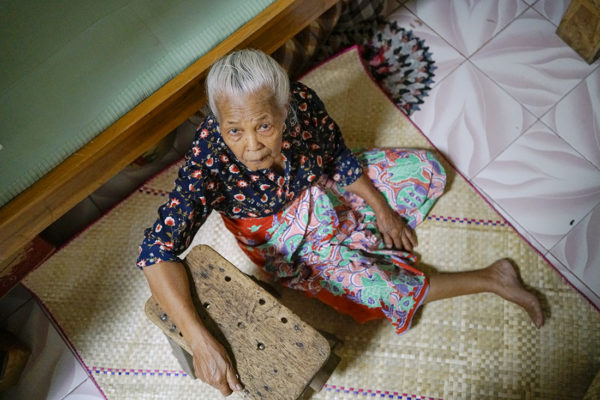 My parents were farmers.  The three sibling with my older and younger brother, we were happy.

I was forcibly taken away and it was scarier because I did not know where I was being taken to.

I was taken to the jungle and locked in a Barak (a house made of bamboo, sometimes refers to a “comfort station” in Indonesia).

Two soldiers came every day. When they did it to me, I felt so lost. I felt I was losing my soul, and I could not remember anything.

I didn’t try to remember who and how many of them did it to me a day. I didn’t have any specific disease but my vagina was itchy and occasionally bled. I did not get any medical treatment because there was no doctor. 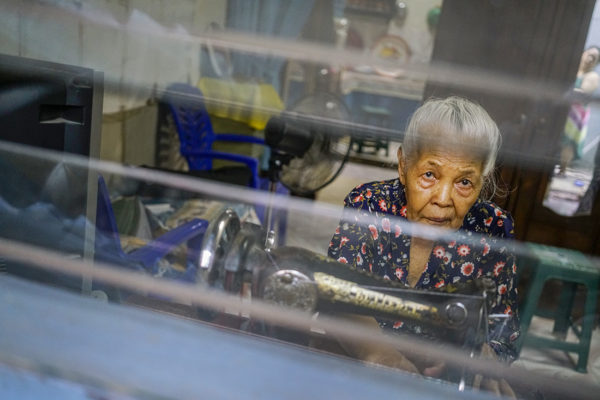 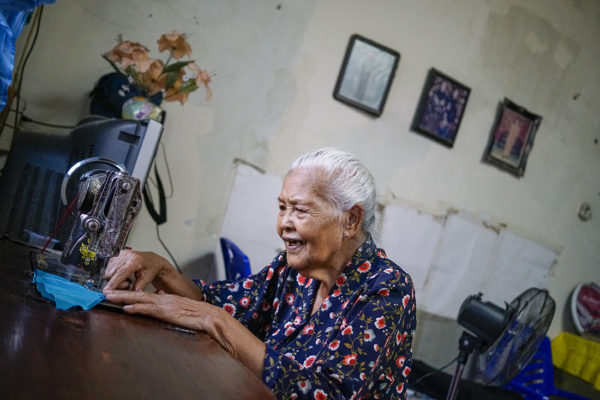 There were 4 more women besides me in the barak, and the Japanese soldiers controlled and monitored us.

I was raped for 2 months even without condoms, but luckily, I never got pregnant. When the Japanese military left after the defeat, they never gave me any money or goods.

When I came home, my father asked me what happened, and I told him I just cooked for the Japanese soldiers. Even after the marriage, I told my husband the same.

* There is an old sewing machine at the entrance to the house. She makes her own clothes and even bed curtains.